Recently, I have written a couple of posts on mathematics found in nature and I just wanted to continue with this topic. For today I decided to write more about some interesting spirals that can be found in nature.

1. Logarithmic Spiral – generally speaking, this is a self-similar spiral curve. This property is used often when talking about fractals. In mathematics, when we say an object is self-similar it means that the object is exactly or approximately similar to a part of itself. Remember when I was describing ferns: the “leaf” looks like a small version of a “branch”, which is a small version of the whole plant.

Mathematicians have been fascinated by this curve: Descartes (discovered in c. 1638), Christopher Wren and Jacob Bernoulli (c. 1692), who called it Spira mirabilis (“the marvelous spiral”).  Christopher Wren studied the shape of a shell to find out more about it.  He found that the widths of the straight lines that link the shell center (the spiral origin) to the points of the shell increase, but the amplitudes of the angles defined by those lines and the corresponding tangents to the shell are constant. On the other hand, Bernoulli was quite fascinated by its self-similarity. Not only mathematicians have been fascinated by this curve: physicists, biologists, astronomers, meteorologists. This is due to the fact that this shape appears very often in nature: spider webs, in certain flowers, the arms of galaxies, the nerves of a cornea, tropical cyclones, shells of mollusks, snails shells and many more.

2. Archimedean spiral – named after the Greek mathematician Archimedes (he did employ it in his On Spirals – c. 225 BC – to square the circle and trisect an angle), this spiral is the locus of points corresponding to the locations over time of a point moving away from another fixed point with a constant speed along a line which rotates with constant velocity. To bring a little light in this, a locus is a set of all points whose location is determined by one or more specified conditions. The definition sounds a little complicated, but it becomes easy when you can imagine the movement in your mind. Due to Archimedes’ popularity, this spiral has gained some popularity, too.

There is an interesting difference between this spiral and the logarithmic one. For the archimedean spiral, any ray from the origin intersects successive turnings of the spiral in points with a constant separation distance (that it is also called the arithmetic spiral). On the other hand, in a logarithmic spiral these distance form a geometric progression.

People have found many applications of Archimedean spiral in engineering, biology and even psychology. This spiral doesn’t appear in nature as often as the logarithmic one, but you can see it easily in ferns, millipede spirals, cabbage, human fingerprint and so on. 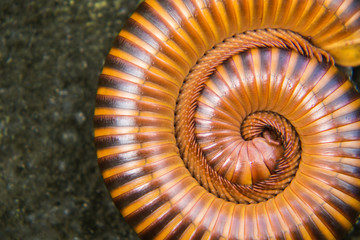 3. Fermat’s Spiral – looks like 2 Archimedean spirals put together, one going clockwise and the other anticlockwise. If you want to find out more about this, Robert Dixon explores some of these possibilities in his book Mathographics. Fermat’s spiral is sometimes called parabolic spiral. It was named after the famous mathematician Pierre de Fermat because he was the first that studied it. It appears in many places in nature, the most common are the arrangement of leaves on a plant stem and a flower’s disk of florets.

Lots of love and don’t forget that maths is everywhere! Enjoy!

One thought on “Spirals in Nature”

This site uses Akismet to reduce spam. Learn how your comment data is processed.

Beyond Infinity: An Expedition to the Outer Limits of Mathematics by Eugenia Cheng
My rating: 4 of 5 stars

Generally speaking I totally liked the book, I don't have any specific things to complain about it. As the title suggests the book is about INFINITY, it starts from very basic concepts & aspects and gradually goes on to more complicated ones. I found it very interestingly split into a part 1 and a part 2.

Moreover, the author uses easy to understand vocabulary and a friendly tone. I felt like I was speaking with a very excited friend, who is sharing their passion with me. I think this is a very powerful aspect and I totally recommend you read this.

The author is well know for great comparisons between mathematical concepts and real life events. You get some lovely comparisons related to cooking (her favourite hobby) and travelling (which were some of my favourite ones... I am not a big fan of cooking). At this part, it might be that some comparisons are not really your type, but this is a very personal aspect. Anyway, there are some great explanations of complex mathematical concepts in here.

I have a more in depth review on YouTube, if you want to check it out: https://youtu.be/s7MYmCoyUv0

View all my reviews